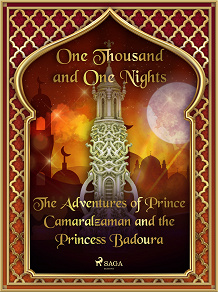 The Adventures of Prince Camaralzaman and the Princess Badoura

by One Thousand and One Nights
Everyone has imagined the boy or girl of their dreams – but what would happen if they appeared in the middle of the night, and disappeared in the morning? Camaralzaman is prince of an island near Persia; Badoura is Princess of China; both have been imprisoned for refusing to marry as their parents wished. But when a fairy and a genie magically bring them together one night, they fall in love and marry on the spot. Now they must search the world for one another, and find some way to make their parents accept their love. Be spirited away by this magical love-story, the twenty-sixth of the 34 tales in the classic Arabian Nights collection, translated by Andrew Lang.