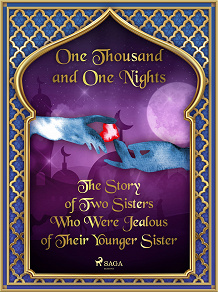 by One Thousand and One Nights
Kosrouschah the Sultan overhears three sisters daydreaming about their future husbands: the eldest wishes to marry the Sultan’s baker so she would never go hungry; the second wishes to marry the Sultan’s carpenter so she would never be homeless; the youngest wishes to marry the Sultan – who instantly falls in love with her. As time passes, however, the older sisters grow jealous of the Sultana, so they decide to take their revenge, kidnapping and abandoning her three children. Rescued and brought up by a humble gardener, the children must complete a magical quest to reunite their family. Discover the enchantment of this Cinderella-like fairy tale, the last of the 34 tales in the classic Arabian Nights collection, translated into English by Andrew Lang.