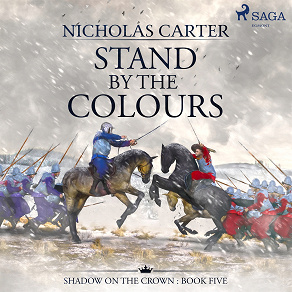 Stand by the Colours

by Nicholas Carter
Loyalty is tested to its limits in this thrilling English Civil War adventure.

In the opening days of 1644, there seems to be little hope for Parliament’s soldiers. To William Sparrow and his men, the woods of Dorset are a snow-covered sanctuary – even on Christmas Day – from the horrors of Penmethock and pursuit by the King’s men. Hugo Telling has finally returned home, ready to introduce his ‘wife’, Bella Morrison, to his family. But the Telling family is now as affected by the war as any in England; Hugo’s brother has volunteered – but on Parliament’s side...

When Hugo and Bella make their way back to Prince Rupert’s stronghold in Oxford, they must consider their justifications for Hugo’s absence. Surprisingly Bella is ordered to the Queen’s service, and now it is up to her to save Hugo – if, for the first time, she can put another‘s needs above her own. And all the while the Scots, the hardiest fighters of all, are making their way through the North of England, bringing new dangers and new fear to the torment that is the civil war.

The fifth instalment of The Shadow on the Crown series, Stand by the Colours, is a triumph, perfect for Conn Iggulden and David Gilman's fans.

Shadow on the Crown author Nicholas Carter is based in the West Country and has been working on his English Civil War series – on and off – for more than 30 years. A writer and journalist since leaving school, Nicholas says joining the Sealed Knot gave him priceless insights into the period – and says many of the events and characters in the books are inspired by his experiences re-enacting battles from the Scottish Highlands to Cornwall.

In addition to his English Civil war series Nicholas has written two novels based on the Italian Wars and also penned a brace of steampunk fantasy novels. He is working on volume seven of the Shadow on the Crown – Forlorn Hope – plotting the New Model Army's siege of Bristol.